I liked that the total was 120 (and determined on it even before finishing all the included post-project memes) for two reasons. First, it is the age by reference to which Jews wish on others a long life (biz hundert un tsvantsik, in Yiddish), in honor of Moses, who was 120 when he died looking over into the promised land he would never enter. Secondly, and perhaps more importantly, it is the number of the apartment in London in which I was born and in which I lived until, at 18, my parents did cross over into that promised land unattained by Moses, leaving me alone in London, effectively (like both Batman and Robin) an orphan. In a sense, you could say that my delivery was prolonged by 18 years, the apartment being a prosthetic uterus. (I often reflect on the fact that for various periods, my bedroom in that apartment was the very room in which I had been born.) It wasn’t until I was forced to leave no. 120 that I finally, fully, tumbled from fetal grace. That event must have been (I say “must have been” rather than “was” because I struggle to remember my feelings) experienced by me as, well… a slap in the face! (Not that my childhood before then was especially happy. But I was sheltered.) 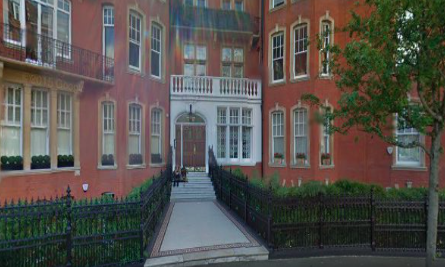 In any case, over time, I came to feel that some of the 120 memes were too weak to be included. I also created a few more which I was sorry would not find a place in the book. Finally, after much agonizing, and with the urging of the other University of Miami Center for the Humanities fellows last academic year, I decided to monkey about with the original selection, omitting and adding with the goal of getting the best memes and not trying to conform to this magical number, however personally significant it was for me. There are now going to be roughly 105 memes altogether. I think this is for the best, but I have to say that all of a sudden, the project feels somehow diminished to me. Not just because it has fewer memes in it. Rather, the work as a whole now seems to me less ambitious, less daring. Instead of the envisaged polyphonic texture, in which themes appear and re-appear, cutting across the division into discrete commentaries and the division between memes and commentaries, I now see a series of short essays interspersed with quite a few perfunctory commentaries in which I will have very little to say. Right now, the projected book strikes me as somewhat pitiful.

I am (fairly) sure this is just a phase and that I will eventually recapture something of the original, animating vision. All lengthy projects involve such phases, surely. The phases are the results of interferences between multiple currents. One current flows from the ‘oceanic feeling’ when the work is not fully formed and contains so much in potential to its birth as a diminished actuality. Another comes in bursts as new ideas unpredictably present themselves, new connections appear. A third involves the relinquishing of anxiety over whether one can actually do what one set oneself to do and a growing amazement at the real little fingers and toes that come into being. And all of these, of course, are superimposed on the currents of the rest of one’s life, with their own vicissitudes. Still, let no-one any longer wish me “biz hundert un tsvantsik.” That number is behind me, not ahead.

11 Replies to “The size of things: biz hundert un tsvantsik”