In the on-going saga of my commentary on the Yiddish Batman meme, I mentioned, in my previous post, an ‘irascible’ expert who found the draft of the commentary I sent him to be riddled with errors. af a nar makht men nit kin peyresh, he said. (“One doesn’t write a commentary on a fool.”) It turns out that at that point, he had only skimmed what I had written. Now he has read it fully and things have gone from bad to worse, though the focus has shifted from my scholarly shortcomings to my ethical failures.

At one point in my commentary, recounting a little of the history of Yiddish, I write:

Starting in the second half of the 18th century, Jewish proponents of the Enlightenment began to stigmatize Yiddish as merely a debased form of German that kept its native speakers from accessing European high culture. The image of Yiddish as a comic, backward, folksy language began to take shape, in contrast to dominant European languages, on the one hand, and Hebrew, on the other – an image that even many subsequent supporters of Yiddish have been happy to accept.

In earlier versions of the draft, I then inserted a footnote in which I mentioned a recent exemplar of the “Yiddish supporter accepting the comic view of Yiddish” phenomenon, a book that starts with a joke about a kvetching Jew on a train and then says: “If you can understand this joke, you’ll have no trouble learning Yiddish.” (Because the essence of the language is the ability to kvetch in it, and knowing that smooths the way over all the bothersome conjugations, declensions, etc.) I noted that “such works appear to extoll the virtues of Yiddish, provided one forgets that the works of Cervantes, Swift, Marx, Einstein, Gilbert and Sullivan, Whitman, Dickens, Shakespeare, and Milton (to name just a few) were all translated into it.” At one point, I even mentioned, in studied proximity to this footnote, Sander Gilman’s book Jewish Self-Hatred. However, I removed both footnotes because the implication about the book I objected to was clearly offensive.

This is all to say that my commentary used to include a fairly strident call-out, of someone by name, and still, by the time it was read by my irascible expert, contained a more general and muted call-out of a particular cultural trope.

But, in another well-known cultural trope, the caller-out has himself been called out. (Can I say I have been “out-called-out”?) For I write in the commentary on my meme that its humor “derives largely from having archetypal Wasps, Batman and Robin (millionaire socialite Bruce Wayne and his youthful ward, Dick Grayson), speaking the archetypal language of European Jews.” But, the irascible expert wants to know, why is having Batman and Robin speak Yiddish humorous? Am I not relying on the idea that there is something ‘comic’ about the language, the very idea I excoriated in my now-excised footnote? That the language is a ‘low’ language (a zhargon, as some Yiddish speakers themselves used to describe the language) with which the Wasp elite are ‘slumming’? To use my own argument on myself, if Walt Whitman and Gilbert and Sullivan can be translated, without humor (or in the latter case, without more humor than the original), into Yiddish, then so, presumably, can Batman!

Like many who have been called out, I find myself (perhaps inappropriately) wanting to defend myself. Is the humor I describe really about dominant vs. subaltern, about the admirable and admired Wasp and the pathetic schlemiel of a Yiddish-speaking Jew (a schlemelion?)? Or is it rather about the incongruity between two cultural styles? (In another meme, Batman and Robin address each other in Latin. But the incongruity between Batman and Latin is not the same as that between Batman and Yiddish, so my invocation of incongruity may be obscuring something important.) But simultaneously (and these Batman Slapping Robin memes are about nothing if they are not about my own intra-psychic sado-masochism), I also find myself wanting to beat my breast, to find myself guilty, to give myself a good slap!

And, there remains the question of what, if anything, I should do about this. I could, without much loss, remove the sentence about the humor’s deriving from “having archetypal Wasps, Batman and Robin (millionaire socialite Bruce Wayne and his youthful ward, Dick Grayson), speaking the archetypal language of European Jews.” (The expert, by the way, contemptuously rejects my “archetype,” and suggests “stereotype” as a clearer mark of my infamy!) Is that necessary? And, if necessary, would it be enough? Or is the meme irremediably offensive, regardless of what I say about it?

I have not, I realize, ever said what the content of the Yiddish conversation between Batman and Robin is, and no doubt that makes a difference. So let me, for the first time, make this meme public: 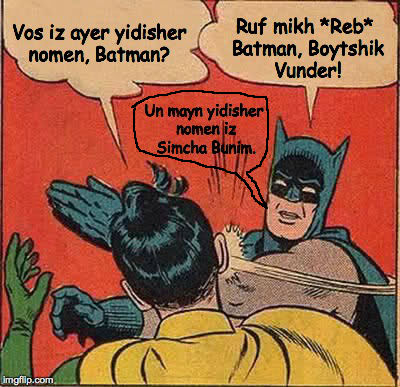 Robin: What is your Jewish name, Batman?
Batman: Call me *Mr.* Batman, Boy Wonder! And my Jewish name is Simcha Bunim.