In my previous post on this blog I mentioned that I had just finished the commentary on a Batman meme that was in Yiddish. I had sought a lot of help in writing this commentary since, not to put too fine a point on it, I often didn’t know what I was talking about. Among those to whom I turned was a very distinguished but somewhat irascible expert on Yiddish. (Do I give away his identity, to those in the know, if I say that he prefers to call that language “Yidish”?)

I sent him the completed draft of the commentary, 8,000-9,000 words long, and, with amazing generosity, he read it all! In it, I briefly mentioned the role Google Translate played in my quest to obtain the Yiddish text for the meme.  I summarize this expert’s response to my commentary using a Yiddish proverb he himself used in reference to Google Translate’s Yiddish: 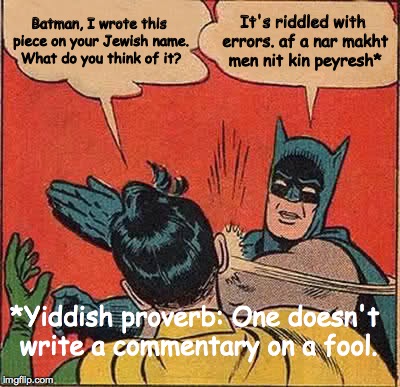 I can only hope, on the basis of his kind offer to help me improve my text, that he does not think me too much of a fool! (But note, for future reference, the small “a” at the beginning of “af a nar.”)

One issue that he raised was my Romanization of the name <Simcha Bunim>. (Of course, to explain the issue, I have already to implicate myself here. I will use pointed brackets to indicate reference to a name that is independent of the alphabet or orthographic system by means of which I achieve that reference).  <Simcha>, he explained, can be either a Hebrew or a Yiddish name. <Bunim>, by contrast, can be only a Yiddish name. (It may derive from the French “bon nom” or “bon homme,” by the way.) Therefore, he reasoned, the compound name <Simcha Bunim> can only be a Yiddish name. Therefore the correct Romanization (there are various methods, but he either alludes to a consensus or the scheme he considers the best) must be “simkhe-bunim,” not, as I had it, “Simcha Bunim.” No capitals, hyphen, and “khe” not “cha.” (af a nar makht men nit kin peyresh!)

Clearly his reasoning depends on some substantive principles:

Well, I have no idea how to resolve these issues. But return to my helpful critic’s preference for “Yidish” as the name of the language at issue. In what language is the name “Yidish”? The Romanization of the relevant Yiddish word will be “yidish,” with a single “d” and no capital. But “Yidish” has a capital and so cannot be a well-formed (i.e. well-spelled and Romanized) Yiddish word. And it cannot be English either, since the English name for Yiddish, well-established by convention, is “Yiddish”!