As it stands, the manuscript of my book-in-progress, A Certain Gesture: Evnine’s Batman Meme Project and Its Parerga!, bears three epigraphs. Those three are very dear to me and the fact that there are exactly three of them is important in the book. So I’m not inclined to monkey about with them.

Notwithstanding, I am repeatedly coming across other passages that would make fantastic epigraphs or that somehow encapsulate something vital about my project. Hence, I am currently considering adding to the front-matter of the book a substantial number of these passages, making up their own section. (Fittingly for a book that is so much about the parergon, I see an interesting copyright issue on the horizon if I do pursue this idea. Quotations in the body of a text generally do not require copyright permission but the same quotations, if used as epigraphs, do. On which side of this divide will my Moby-Dick-like collection of quotes about slaps fall, placed, as it will be, between the epigraphs proper and the main text?)

Here is one marvelous passage which so accurately seems to capture how I have used  the image of Batman slapping Robin that I gasped when I first read it. I will certainly include it in the envisaged section, if I do decide to go with that. The passage is from David Grossman’s bravura novel A Horse Walked Into a Bar and it concerns a stand-up comic who is failing to get a laugh from his audience:

Now he screams: “No? Not at all? No, no, no?” He slaps his face, ribs, stomach. The spectacle looks like a fight between at least two men. Within the whirlwind of limbs and expressions I recognize the countenance that has passed over his face more than once this evening: he is uniting with his abuser. Beating himself with another man’s hands.

Perhaps this theme is most clearly sounded in my book in the commentary I have provided to a meme in which Robin says only “I am being slapped by Batman” and Batman replies “I am slapping Robin.” The commentary itself is in the form of another meme, in the genre Increasingly Verbose. In this kind of meme a pair of image and text is iterated several times, the image becoming more abstract and the text becoming increasingly verbose with each iteration. Here it is, made public for the first time. 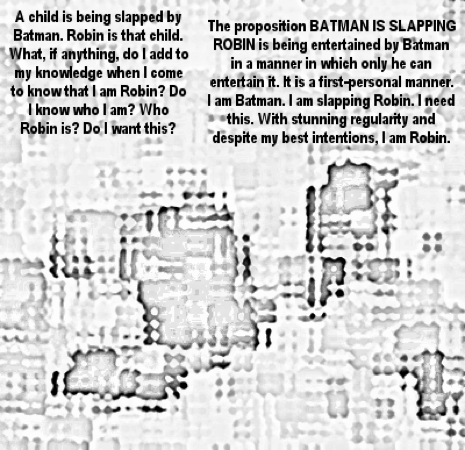 2 Replies to “Epigraphs: or, beating oneself with another man’s hands”