Here is an excerpt from my book-in-progress, A Certain Gesture: Evnine’s Batman Meme Project and Its Parerga!. I’ve been posting here a lot about loss recently and this meme is  a manifestation of that sentiment inside the book. I am really moved by what I did in this meme. (Is it perverse to be moved by one’s own creation?) 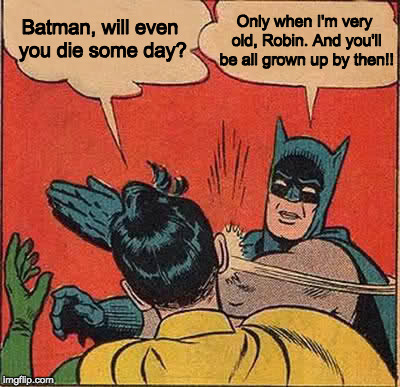 Adam West, who portrayed Batman in the 1960s TV series, died on June 9th, 2017, two days before this meme was composed and posted on Facebook. There can be no doubt that it was intended as a tribute to him. The meme has great pathos, owing, I think, to the discrepancy between Robin’s age and the much younger manner in which he expresses himself. (In this incongruity, it resembles M.25 (“Mr. Peabody”).) Robin sounds like a child of six or seven, beginning to confront the reality and the universality of death. Batman plays the role of the loving parent, attempting, but inevitably failing, to make this unacceptable fact acceptable. The slap, so at odds with the love and care Batman exhibits towards Robin in his words, actualizes the way in which no amount of tenderness can mitigate the slap in the face that is death, and loss in general. (See also M.21.)